I’ve been a big fan of point and click adventure games for as long as I can remember, and it all started with one very special game, which was released for the Amiga when I was 10 years old – The Secret of Monkey Island.

From the moment the hero of the game – Guybrush Threepwood – appeared at the lookout point on Mêlée Island, announcing his ambition to become a mighty pirate, I was hooked. And Guybrush stayed with me as I grew up, with the awesome sequel – LeChuck’s Revenge – released just a year later, then The Curse of Monkey Island when I was about 18, followed by the somewhat disappointing Escape from Monkey Island in 2000, and the slighty better Tales of Monkey Island in 2010.

It was the first two games though, with their beautiful pixel art and tongue in cheek humour, that really made me a lifelong Monkey Island fan.

I first got the idea for a Monkey Island themed painting when I was walking through the woods near where I live, and I came to a crossroads with a tree stump. Something about it really reminded me of the treasure hunt in the first game, where you have to get your hands on a map to help you navigate the forest to find the treasure of Mêlée Island.

The idea kept returning to me every time I went for a walk in the woods, and I eventually decided to do a series of paintings based on The Three Trials that Guybrush has to complete as the first part of his quest to become a pirate.

In this first painting, Guybrush has acquired a sword, trained with Captain Smirk, and honed his skills at insult swordfighting on a host of nefarious pirates he encountered on the island. Now he’s ready to do battle with the legendary swordmaster of Mêlée Island, Carla. As he emerges from the forest and catches sight of Carla waiting for him outside her house, he pauses to ask himself one last time – which is sharper, his sword or his wit? 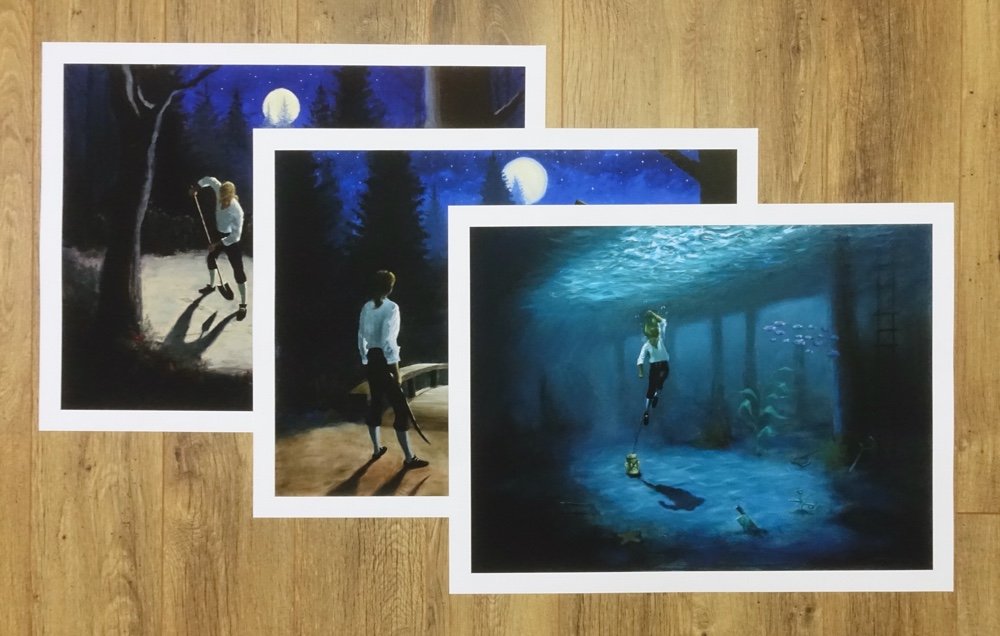 If you liked this, stay tuned for the paintings based on the other two trials – Thievery, and Treasure… Huntery.

Look behind you, a three-headed monkey!

1 thought on “Monkey Island: The Duel”

Get new posts by email

Subscribe now to get your free copy of my ebook How to Paint with the Zorn Palette.

Also get my new posts and occasional exclusive special offers direct to your inbox.