I recently had the great pleasure of attending Sean Cheetham‘s 5-day portrait painting workshop on the Spanish island of Menorca.

I first heard of Menorca Pulsar a couple of years ago, and when I noticed that Sean was teaching a workshop there last year, I started to pay closer attention. When they announced another workshop with him this year I thought I might not get this opportunity again, so I signed up and booked my flights. (There was a whole Thomas Cook drama a few weeks before the workshop, but I won’t go into that!)

Their workshops all take place at Son Triay, a beautiful old villa in Menorca’s countryside. There you can forget about everything and just focus on learning and painting. One of the main benefits of this setup is that you stay in the same place as the workshop teacher, so as well as the daily classes, you get to hang out with them at mealtimes and between sessions, so you have every opportunity to absorb everything they have to teach you.

We arrived on a Monday, and had an afternoon to relax and settle in, meet Sean and his girlfriend, Kate Zambrano, and the other attendees, and enjoy a welcome dinner, then on Tuesday morning, the learning began.

The first day we were using only charcoal, no paint, and focusing on drawing and values. Sean demonstrated how he approaches 1 minute, 2 minute and 10 minute poses, then we did the same, drawing from live models in the studio, and in the afternoon we did a longer charcoal study.

Here are some of my efforts in charcoal from day 1:

Because the weather wasn’t great the first few days, the organizers, Jorge and Carles, arranged for an extra model to come in and pose between the end of the class and dinner, so we could draw/paint pretty much all day if we wanted to! The studio was actually open 24 hours but, you know, sleep is important too.

On the second morning, the paints came out, but acrylics, not oils, and just black and white. Sean demoed how he paints a black and white value study in acrylics, using just 5 values: a midtone ground, two light values and two shadow values.

Then it was our turn again:

After lunch we broke out the oil paints, but only a few colours. We were doing master copy colour studies using the Zorn palette. Traditionally that’s Titanium White, Yellow Ochre, Vermilion (or Cadmium Red Medium) and Ivory Black. But in our case Sean showed us how to mix a richer black from Alizarin Crimson, Olive Green, and Ultramarine, so we used that instead of the Ivory Black. We used a selection of reference images from paintings by Anders Zorn himself, and John Singer Sargent.

Here are a couple of the studies I did using this modified Zorn palette:

The third morning was mostly a demo of a portrait from live using the same Zorn palette from day two.

Sean has a great knack for explaining his process in a way that is clear and makes perfect sense. Executing it is another matter though! In the afternoon we tried our own study from life. I happened to be sitting in the exact same position as Sean was during his demo with the same model, so I basically tried to emulate exactly what he had done earlier as closely as possible. Here’s my study:

That evening, the weather had improved, so a few of us took the opportunity to go for a bit of a hike and take in some of the beautiful scenery.

This was the final demo painting, where Sean demonstrated a painting using his full palette. It was incredible to see the entire painting completed in not much more than 2 hours.

Here’s my 3 hour study from that afternoon using the full palette: 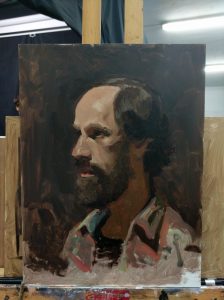 No demo on the last day, we had a full 6 hours to complete one painting, while in the breaks Sean shared some tips about working with the iPad, glazing, and a few other things. Every day while we were painting he also walked around the studio spending time with each of us, giving advice and guidance.

Here’s my painting from the last day:

To say this was a good workshop would be the world’s biggest understatement. I think I learnt more about painting in these five days than in the previous five years, and I’d never before had the chance to spend so many days in a row just constantly painting.

Sean is a great teacher as well as a super friendly and humble guy, and he was always happy to chat about anything and share all his knowledge. I didn’t feel like he held anything back.

I hope I’ll get the chance to attend another Menorca Pulsar workshop at some point in the future, maybe with Sean again, or maybe one of the other awesome teachers they have. If you’ve been thinking about signing up and you’re not quite sure, I can highly recommend it. You won’t regret it. If you have any questions about it, leave a comment below.

Get new posts by email

Subscribe now to get your free copy of my ebook How to Paint with the Zorn Palette.

Also get my new posts and occasional exclusive special offers direct to your inbox.